On January 31, 2020, President Trump, through a Presidential Proclamation, added six countries to the list of nations whose citizens will face visa and travel restrictions to the U.S. The countries affected by the current iteration of the travel restrictions include Eritrea, Burma (Myanmar ), Kyrgyzstan, Sudan and Tanzania.

Following that model, various determinations were made regarding each of the countries included in the current version of the travel ban. But the overarching rationale turns on national security and foreign policy considerations. Regarding the affected countries, the proclamation cites, in particular, an “unwillingness or inability” to adhere to “baseline” security criteria. It further cites “insufficient information sharing” from the various governments of the affected countries about “criminal and terrorism data, a lack of electronic passport systems and issues with Interpol reporting methods about potential terrorists and criminals.”

It is important to note that the proclamation “prioritized restricting immigrant visa travel over nonimmigrant visa travel” because of what it describes as “the challenges of removing an individual in the United States who was admitted with an immigrant visa if, after admission to the United States, the individual is discovered to have terrorist connections, criminal ties, or misrepresented information.” However, this rationale seems counterintuitive because security lapses could occur with any visa, whether temporary or permanent. In addition, immigrant visa applicants go through a more rigorous vetting process involving many layers of security screening before entry into the U.S., and at each level, the applicant bears the burden to prove his or her eligibility for an immigrant visa. 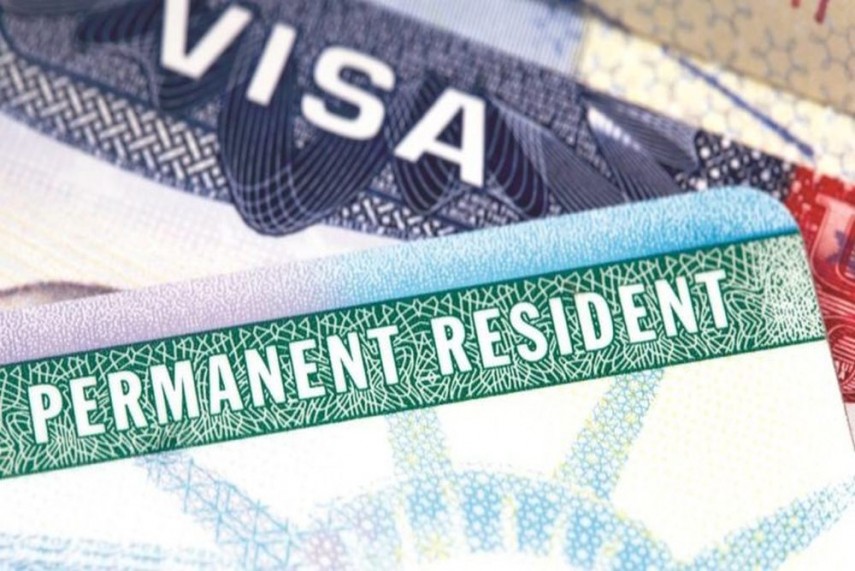 The proclamation bans nationals of Sudan and Tanzania from participating in the diversity visa lottery under section 203(c) of the INA, 8 U.S.C. 1153(c).

For the other four countries: Nigeria, Eritrea, Myanmar and Kyrgyzstan, it suspends the issuance of visas that can lead to permanent residency.

The proclamation applies to foreign nationals of these designated countries who:

Under the proclamation, “outside the United States” is understood to mean foreign nationals who are not in one of the 50 states (the District of Columbia, Puerto Rico, the U.S. Virgin Islands, Guam, the Northern Mariana Islands, or American Samoa) as of February 21, 2020.

It is significant to know that the current travel restrictions apply to green card applicants outside of the United States as of its effective date, meaning that foreign nationals in the United States on or before that date may be eligible to submit a green card application using the same adjustment process, they would use before these restrictions.

The current restrictions will apply to any foreign national of the affected countries who did not complete his or her green card interview prior to February 21, 2020. This is quite unlike previous immigration policies and regulations, which offered protections to those with pending applications. As a result, immigrant visa applications filed before February 21, 2020 will be affected by the travel restrictions of the current proclamation only to the extent that the applicant did not complete his or her interview and the visa application was not approved before that date.

● Any national who is in the United States

● Any national who has a valid visa

● Any lawful permanent residents of the United States

● Any foreign national who is admitted to or paroled into the U.S.

● Any foreign national who has a document other than a visa (e.g., transportation letter, boarding foil, advance parole document)

●Any foreign national traveling on a diplomatic visa

● Any foreign national granted asylum and refugee who has been admitted to the U.S.

● Any foreign national who has been granted withholding of removal, advance parole, or protection under CAT

d. Waiver under the Proclamation

As with the exceptions discussed above, the waiver provisions of the earlier iteration of the travel ban applies to the recent proclamation, and allows a case-by-case waiver of the

the entry restrictions of the proclamation for individuals otherwise affected by the restrictions who must demonstrate all of the following: (1) undue hardship if entry were denied, (2) entry would not pose a threat to national security, and (3) entry is in the national interest. However, the decision of a consular officer to grant or deny a waiver is discretionary. In any case, the burden to “demonstrate” eligibility for a waiver under any of the aforementioned grounds is on the visa applicant.

There is no separate application for a waiver request.  Any foreign national affected by the travel restrictions who seeks to travel to the United States would submit a visa application and disclose   during the visa interview process any information that might show that he or she is eligible for a waiver. The consular officer may in his or her discretion grant a visa if the officer determines that an applicant has met all the waiver requirements.

Recently, the US Supreme Court upheld an earlier version of the visa and travel restrictions in Trump v. Hawaii, and rejected the argument that the restrictions violated federal law forbidding discrimination based on nationality in immigration visas. The Court found that the language of that “Proclamation does not exceed any textual limit on the President’s authority,” and therefore lawful under the immigration statute and the U.S. Constitution. Nevertheless, it is very likely that there will be legal challenges to this current version of the travel ban, but if based on the same constitutional arguments canvassed in Hawaii, there may be no better chances of a successful outcome than in the previous action since it is quite unlikely that the current Supreme Court will overrule itself in Hawaii, especially considering that the current proclamation is an expansion of the previous travel ban in that case. Thus, except if there were new legal grounds to challenge the current version of the ban (like non-delegation of legislative power argument that was not canvassed in Hawaii), or possible legislative intervention, it is almost certain that the travel ban program in its various iterations would become an entrenched part of U.S. immigration policy.

However, an unconstrained presidential power to exclude the entry of certain nationalities, which any sitting president in his or her sole discretion finds that their entry would be "detrimental to the interests of the United States" would certainly harm U.S. economy in the near future and cause exceeding hardship on U.S. citizens who will no longer be able to reunite with their family members living in any of the affected countries. It is true that the courts have generally deferred to the executive branch on immigration issues, and true that any immigration policy takes national security into account. Nonetheless, the United States is an increasingly diverse society that affords an unrestricted opportunity to its citizens and nationals to participate in the political process. Thus, a sweeping policy shift like the travel ban program, one would argue, should derive from sources of information and influence that help drive policymaking, including executive and legislative commissions, professional, public interest, consumer, and community-based organizations. In the event, the result would be a policy that is well formulated through rigorous and objective assessment of data and not through presidential executive orders that target certain nationalities.

If you need legal assistance on how this current travel ban or any other immigration program affects you and your family, contact us today at attorney@lgic.us or call us at 202-349-5784.

If you need a lawyer ... We can help you

“Be sure to put your feet in the right place, then stand firm.” —Abraham Lincoln

At LGIC, whether you are an individual or corporate entity engaged in national or cross-border business, our attorneys are dedicated to providing competent and efficient legal services to you and your business, helping you pursue your most valued goals.